We ask you to send us your nation’s folk narratives or legends explaining caves and karst phenomena and celebrate the International Year of Caves and Karst with us. We want to share your stories with our readers here on this page.

The creation of landscapes does not start with ploughing or building shrines, it starts with establishing the relationship between people and their surroundings, says dr. Nadja Penko Seidl from the University of Ljubljana and dr. Jasna Fakin Bajec from the Research Centre of the Slovenian Academy of Science and Arts. One of the first humans’ activities in the environment is naming. It is the first step towards domestication, towards creation of a landscape out of sheer physical environment. Landscape is engraved with names that carry information about the way people perceived, interpreted and adopted the environment to their everyday needs.

However, one of the interpretations of landscape features are also the legends explaining them. What better way to celebrate the International year of caves and karst as to honor our peoples and nations hundreds or thousands-years old bonds to them.

Download the Collection and Photo Rights Agreement Form .docx .pdf and share your piece of nation’s tradition with us.

Why there are no surface running waters on Karst 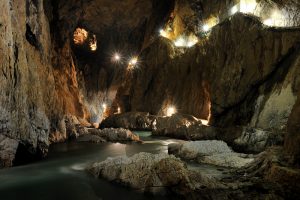 The legend says that people from Karst suffer lack of running waters due to a sin that they committed against Christ and St. Peter when they travelled across Karst. They traveled during summer heat. They were tired and laid down in the shadow near a river that flew from upper to lower Karst and fell asleep. A local comes by, takes the prosciutto from their backpack and puts stones inside. When they awake, they want to eat, but the prosciutto is gone. St. Peter becomes furious and asks Christ to punish the locals. After nagging a long time, Christ gives up and orders the river to sink into the ground together with all the streams. Since than Karst have no water springs no running waters on the surface, but underground.

How the Škocjan Cave came into being 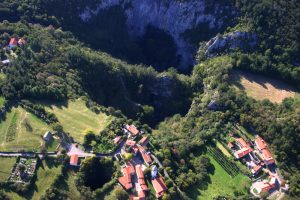 It used to be very different around here. From the mountains of Brkini and Vremščica overflowing streams flew into a surging river that ran through the valley. Beginning at Mt Snežnik, its bed travelled across Gabrk and down past the village of Povir to the whole region of the Karst, finally emptying into the Adriatic Sea. Because of the river’s abundant waters it was given the name of Reka – river.

In those days a wondrous chariot, shembilia, was driven through this part of the country.
A strong, metal shembilia would race through the Vremska valley every day, pulled by fiery black horses, whizzing past the village like a thunderbolt. The breath of the horses was pure fire. Day after day, year after year, century after century, shembilia would dart along the same path, sparks flying from beneath her wheels and from under the horses hoofs. People would rush off the road, trembling in fear before she flew past them. After she had passed the village, they would hardly dare return to the road. And yet shembilia had never harmed anyone. If she did happen to meet someone in the street, the horses would fly up into the sky and over that person.

But one day the devil came to our part of the world. Seeing shembilia, he got the idea to race with her. He waited for her at the village of Bitnja. First he ran side by side the horses, then swung and leaped onto her, and with a long whip he began lashing the fiery horses. The horses went wild, and shembilia raced down the valley, carving a deep channel, where the Reka began to flow, creating a still deeper bed. From Škoflje down it was over a hundred metres deep. At the foot of the village of Škocjan the horses flew up into the sky. Lashing them, the devil made them race back towards the river. They wheeled round forming a big circular cave Okroglica. Shembilia wanted to lose the devil, so she drilled a vast tunnel right through the rocks to the other side and into the sea. In the wake of her tracks gushed the river. The devil loved to race, so whenever he saw shembilia race, he would sit on her and ride along. When they came to Škocjan, he directed her into the cave and raced with her all the way to hell’s gates.